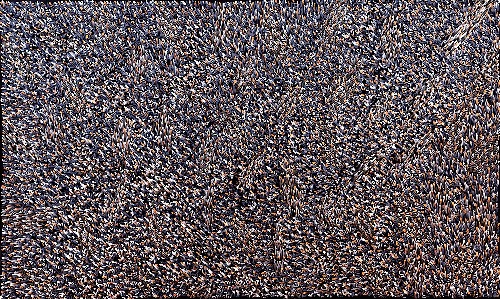 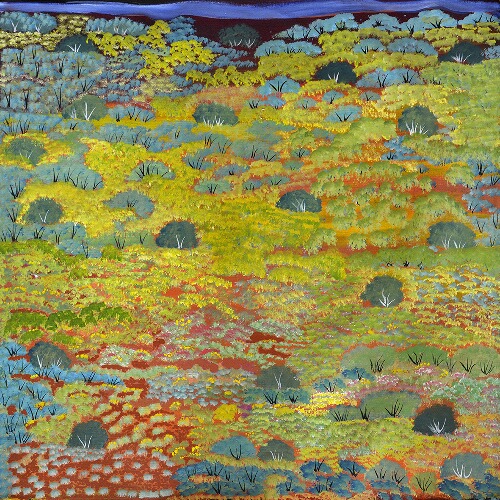 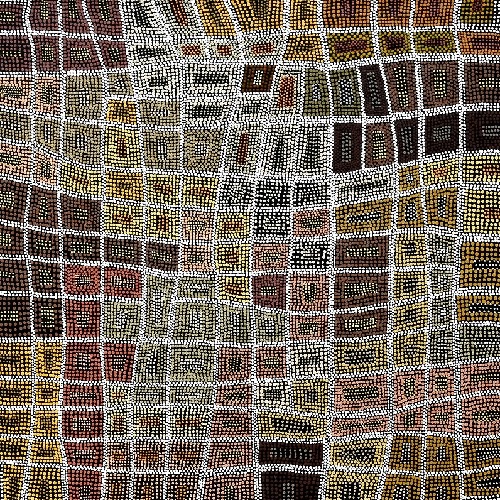 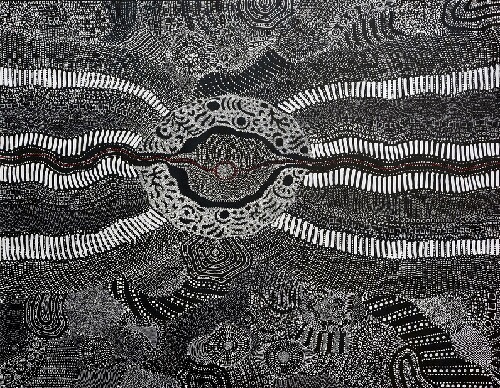 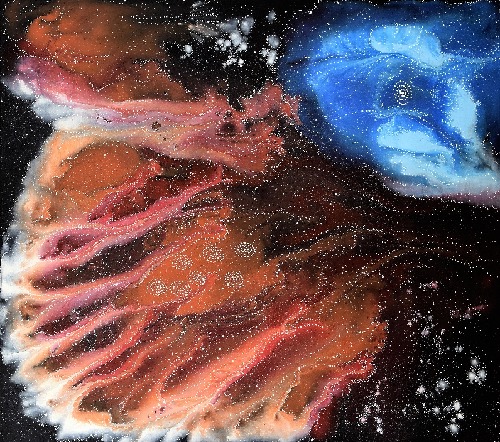 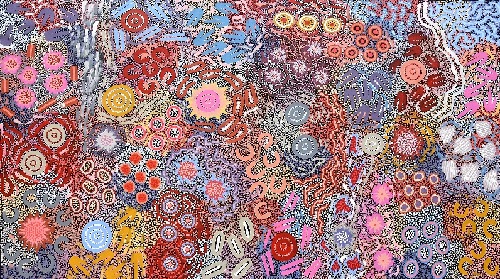 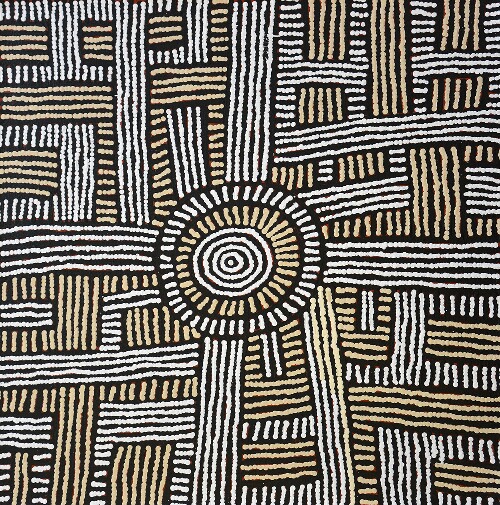 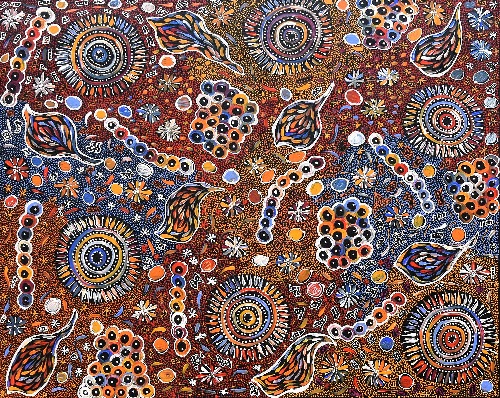 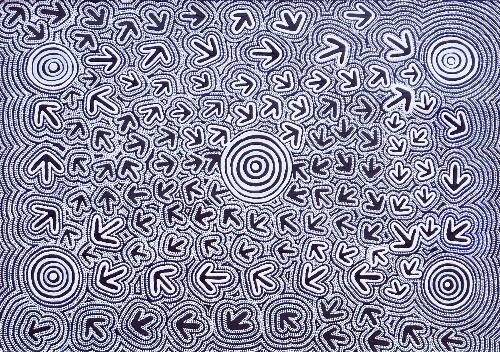 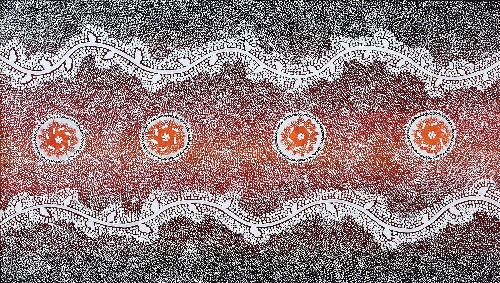 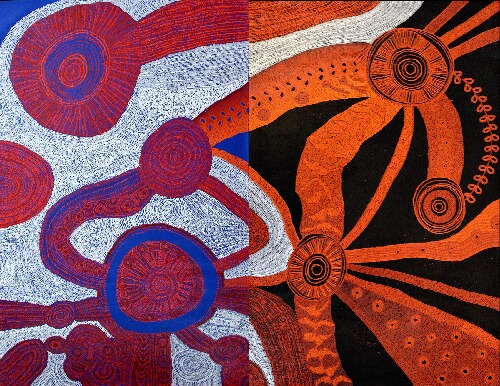 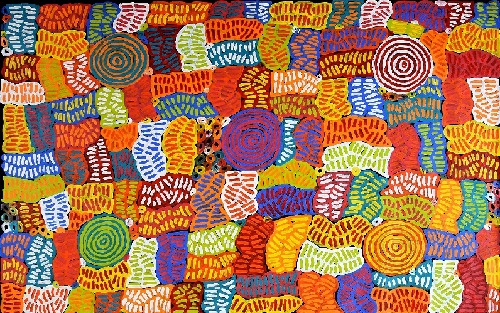 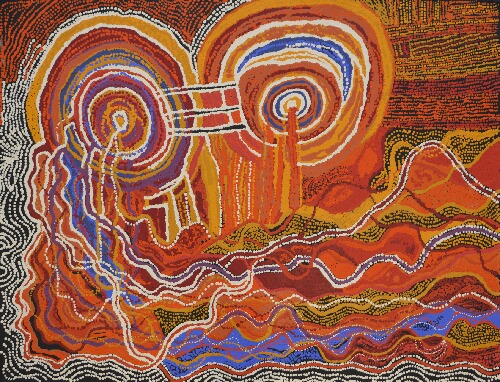 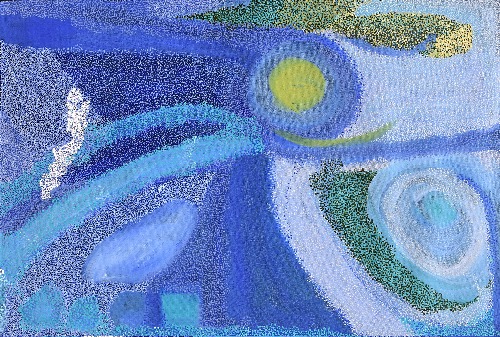 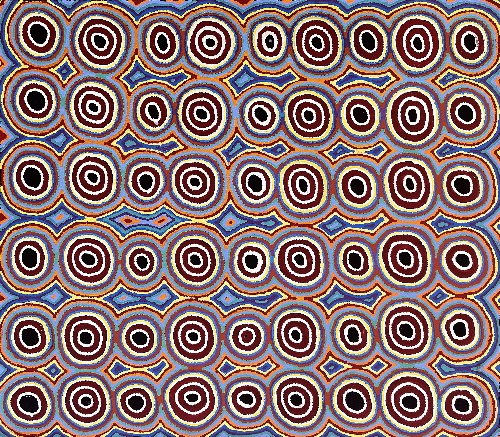 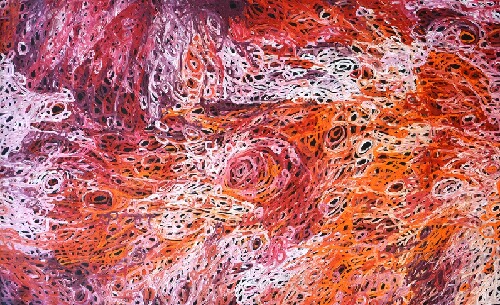 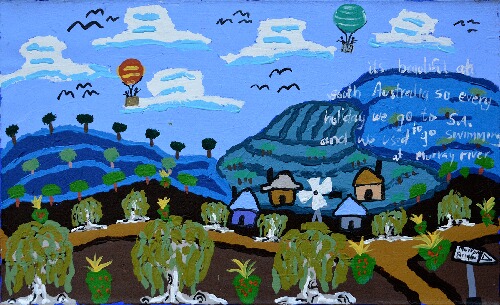 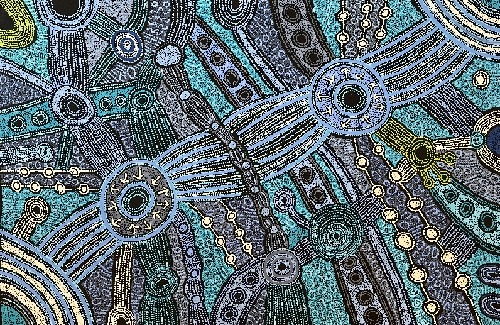 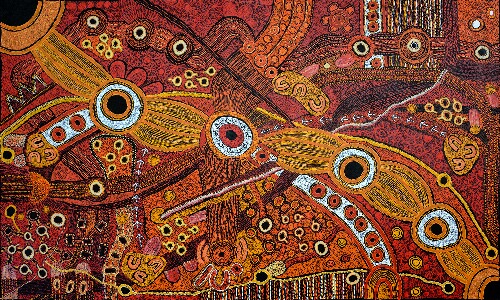 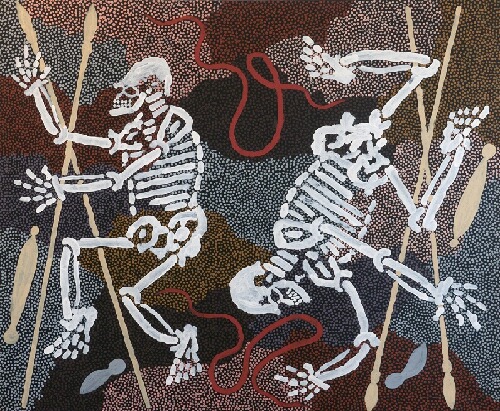 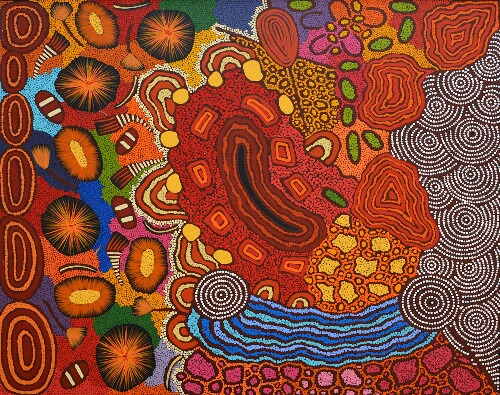 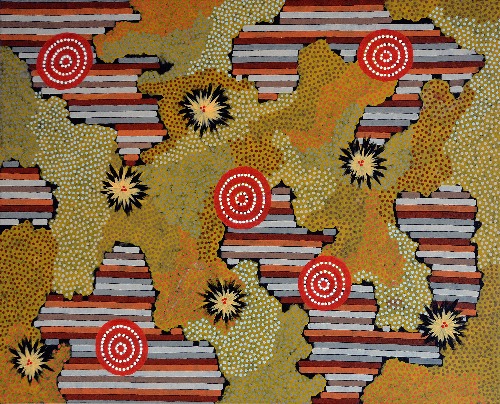 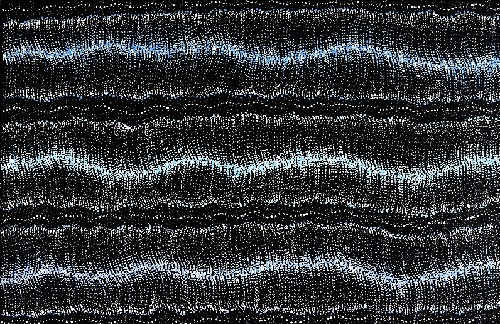 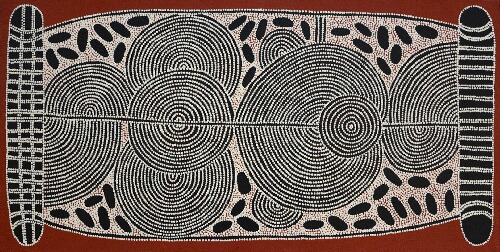 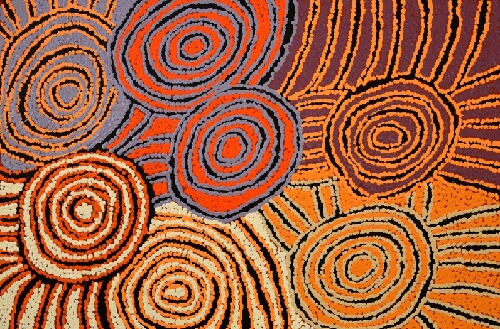 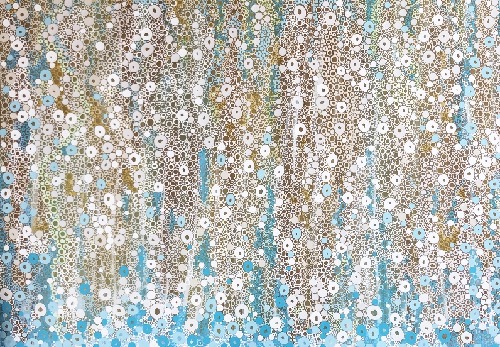 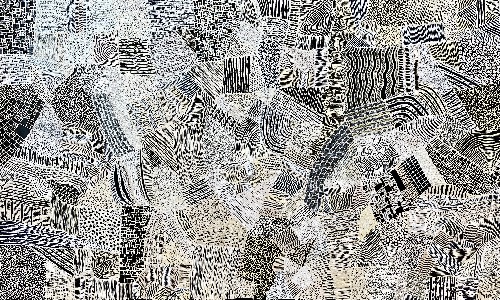 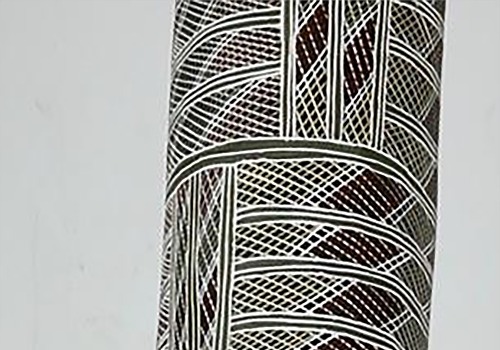 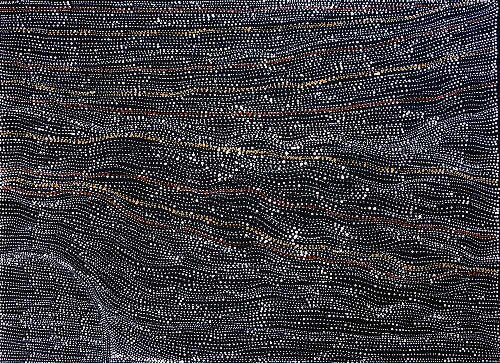 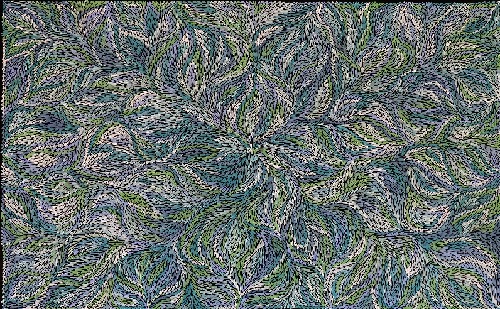 Indigenous Australian art is truly varied. Kate Owen Gallery represents over 200 Australian Aboriginal artists from Aboriginal Communities, cities and towns right across Australia, allowing us to showcase a huge diversity of styles and artistic influences. Traditional Aboriginal art is juxtaposed with the more contemporary expression of dreamtime stories found in art from the eastern seaboard and its hinterland and with new approaches being experimented with by younger artists from remote regions.

Aboriginal dot paintings from the central desert sit with styles including ochres from the Kimberleys, artworks from a variety of east coast artists and bush medicine leaf works. With this diversity of sources and influences comes a huge variety of Dreaming stories ranging from wandjina spirits of the Kimberleys to water-based Aboriginal stories and rarrk paintings from the Top End. Tingari paintings and others rich in desert symbolism can be found along with long ignored Dreamings now revived by passionate young urban and regional artists.

Female Aboriginal artists represent over 70% of the artists at Kate Owen Gallery. This is the complete opposite of the profile historically. For example, it was not until the 1995 Haasts Bluff-Kintore painting project that western desert women were formally introduced to painting. For the 25 years preceding this, amongst the Pintupi, men had formed almost 100% of those practising, though the women often worked doing background dotting. Apparently the women eventually rebelled at being required to do the majority of the work yet getting little of the pay and none of the credit. Perhaps they had also seen the success the women from the Anmatyerre and Alyawerre tribal groups were enjoying following their 1988 painting project and were motivated to strike out and make their own names. Whatever is was, women now clearly dominate not only Kate Owen Gallery’s stable of Aboriginal painters, but the industry in general and the trend in continuing.

Whilst the gallery is proud of the extent of the diverse tribal and Indigenous cultural backgrounds of the artists it represents, two tribal groups really stand out numbers wise. Warlpiri artists from the Communities of Yuendumu and Nyirripi and Pintupi from Kintore, Kiwirrkurra and Tjukurla Communities represent almost 50% of our artists. Despite the concentration from these locations, there is great diversity of artistic approaches within each of the groups. For example, the Warlpiri stable features the minimalistic black and white fine dot paintings of Dorothy Napangardi alongside the exuberant and colourful works from Judy Napangardi Watson. The Pintupi tribe tend much more towards the pared back colour palette associated with classical Aboriginal dot painting but there are strong differences in approach to their Dreamtime stories.

Indigenous art from the Anangu Pitjantjatjara Yankunytjatjara (APY) Lands have gained much prominence in the last 15 years, particularly since the 2007 Culture Warriors Triennial. Over 20 Indigenous artists from the APY Lands, including Jimmy Baker and Maringka Baker, are represented in our collection of artworks for sale.

Another group worthy of mention are the Anmatyerre and Alyawerre from the Utopia Region, north east of Alice Springs. As well as being the home country of Australia’s most famous aboriginal artists, Emily Kame Kngwarreye, Utopia is the home of three iconic expressions of Aboriginal Dreamtime stories, the Bush Medicine Leaves style pioneered by Gloria Petyarre, Barbara Weir’s Grass Seed series and the Awelye style pioneered by the late Minnie Pwerle.

All of the above can be found through the A to Z search on this page and under the Region search tool in the search bar to the left.