Art critic Robert Hughes described Aboriginal Art as the “last great art movement of the 20th Century” and can be likened to other ground-breaking art movements such as the impressionists in Paris in the late 19th Century. However, unlike art movements of the past, the growth of Aboriginal art shows no signs of abating in the 21st Century. 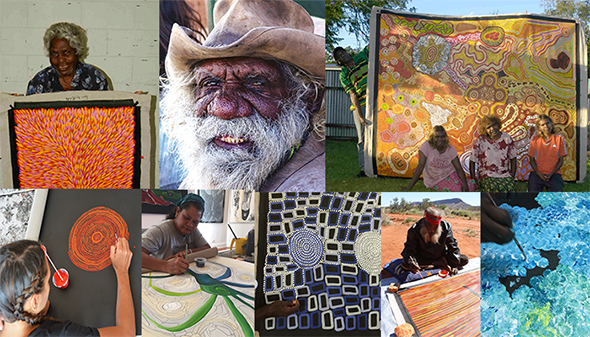 Indigenous Australian art is the oldest ongoing form of artistic expression in the world. The earliest forms of Aboriginal art were rock carvings and paintings, body painting and ground designs. There are engravings on cave walls in Arnhem Land dating back at least 60,000 years - quite amazing when the cave art in Dordogne’s Vézère valley in France is roughly 12,000 years old! The ancient rock art and engravings depict figures, birds, animals, mythological creatures and non-figurative designs. Paintings and engravings of more recent origin sometimes lie next to these ancient paintings, or even partly cover them.

Throughout history, Indigenous Australians have adapted to a range of changes, including the end of the ice age about 10,000 years ago! Aboriginal art and culture shows the same adaptability. It is organic and constantly evolving.

Today, Aboriginal art ranges across a wide variety of media and reflects the richness and diversity of Indigenous culture and the distinct differences between the language groups and geographic landscapes.

Indigenous artists take their inspiration for their art from a wide variety of sources ranging from overtly “traditional” sources such as rock art and body painting, still done for ceremony today, to the most contemporary of topics from modern society. Between these extremes sit numerous styles such as those which interpret the artists’ dreaming stories and others which depict more recent history such as ‘first contact’, the affects of colonisation, or their own incredible life story and topics that are important and impinge upon their life.

Some are of the opinion that it is only the art from traditional sources that “qualifies” as true or genuine Aboriginal art. This attitude misunderstands both the art and the artists. Consider this, the use of western art products to express Aboriginal culture only really started 40 years ago. Thus, “tradition” is being created as you read this.

Aboriginal art is incredibly captivating, expressive and much more than just dots!