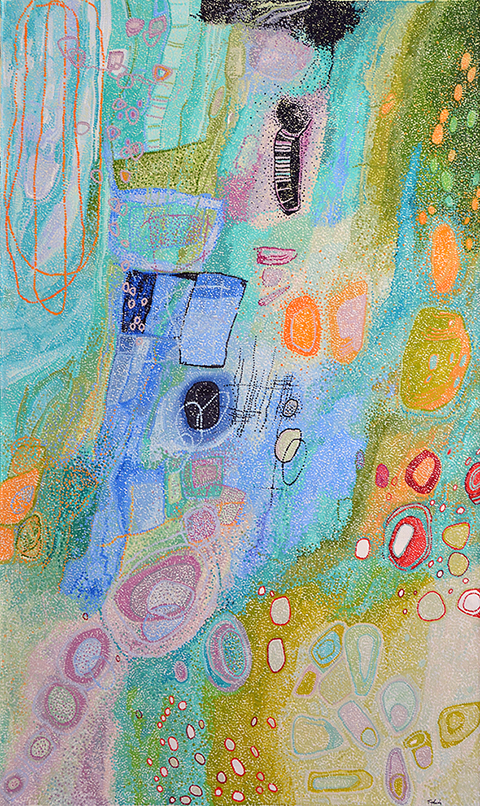 This painting depicts our ancestors and billabongs and waterways for hunting for survival !

The old people looked after our country. They say don't be greedy. Only get enough for family and always share.

Also found are small stones used to sing someone to love you.

This story is depicted in green because food and freshwater is always  plentiful. Small black and red circles are the different wadjigan tribes that walked before us.

White circles up top are the white stones used to sing someone to you."

"My grandmother, grandfather, mothers and uncles were born along the northern coast of Australia!

No hospitals, no doctors or nurses.

Most were born under trees but in different places.

They travelled by canoe and walked everywhere.

They stay in certain places that my grandparents knew freshwater and food could be captured and gathered.

I have depicted manmade huts, hunting tools, water holders and dillybags used to give comfort and the other items to make their daily lives easier.

My mothers always talk about being happy and free to play on the beaches and on country .

The red areas depict the land.

The dark blue area is the mainland, where freshwater can be found. 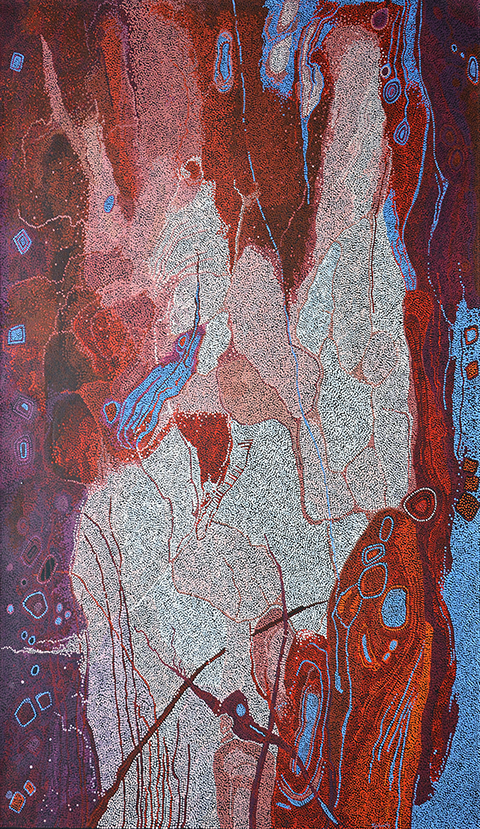 "During the dry season up north, they burn off the country.

At the end of the dry season before the wet starts the ants start building their mounds.

The height of these anthills tells the people how big the wet season is going to be.

Long time ago the elders would know to move to higher ground. Especially when they lived by rivers creeks or in low lying areas." 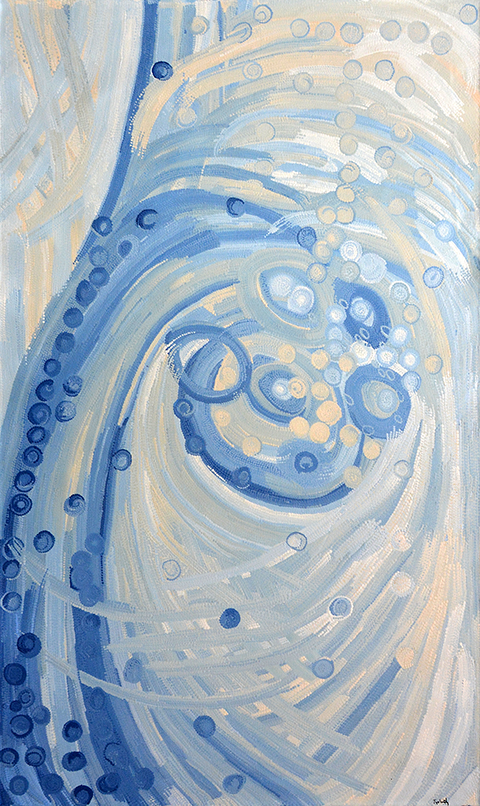 "As told simply by mum Marge.

She sits infront of natpuk.

She sits under the water.

She don't bother anyone but when she smells people entering into Balgal by canoe or boats, for the intention of hurting the locals.... she rises above the water and sends bubbles, water and strong waves flying everywhere.

She takes them down with her.

Old people believe this story and never hunt or fish in this certain area!!!" 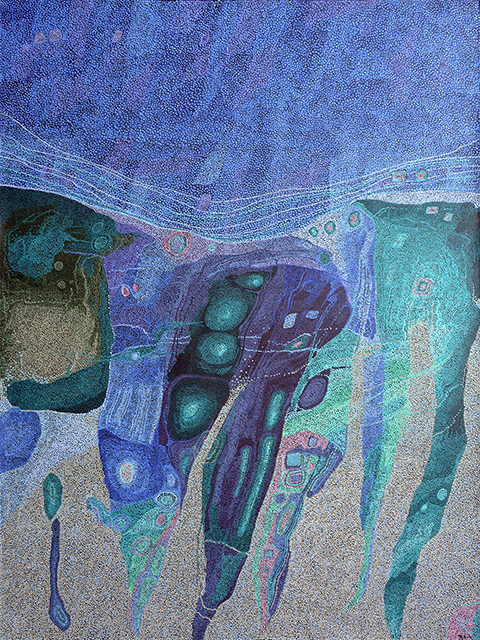 "When it is half moon the sea isn't rough and doesn't come in or out to far.

This is the best time to go reef fishing and spearing.

My grandfather always went reef spearing to provide for his family!

This is the name for the dry season in the lands of the Douglas Daly.  The dry is announced by the wind swinging around to the south bringing the dry winds of the desert.  As the land dries out and the water goes down, you can start hunting for turtle in the mud.  They have started to hibernate.  You can tell that they are there by a cone like shape that protrudes from the mud.  Sometimes you can also hear them breathing.  You can also start to go in the water to spear fish. 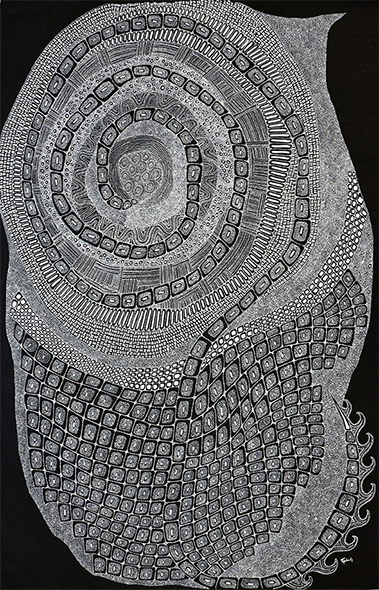 Many years ago a man lived in the Daly River area that was a great fisherman.  He was admired by all in his tribe as he could always be relied upon to bring food into the camp from his fishing trips.  His legend grew over time and whilst the admiration remained, jealousies started to surface. Some men became concerned that their wives held the fisherman in far too high esteem.  One night he went out fishing and was following by some jealous men from the tribe. Whilst he was fishing, the men snuck up behind him and threw his fishing net over him. The man struggled and rolled, trying to extract himself from the net but the net only wound itself tighter and tighter. Eventually, his spirit left his body and the other men hung his body, still wrapped in the fishing net, from a tree. When the fisherman did not return, his wife grew worried and went out looking for him.  Eventually, she found him. Overcome with grief, she wrapped herself in her own fishing net and threw herself into the water. Her spirit left her body and she could then join her husband. When the people of the tribe found her body, they hung her next to her husband.

The painting shows the man and the woman hanging in their fishing nets. One can see where their skin comes through the nets, bulging out in squares, much like the skin of a crocodile.  It was in this way that the salt water crocodile came to the top end.

In Helen’s country there is both saltwater and freshwater, with an abundance of fish. In the olden days, people would go hunting with fish nets woven out of pandanus. Over time, parts of the fish net would rot and need repairing.

Today Syaw is still made, but as more of a decorative object rather than for hunting. 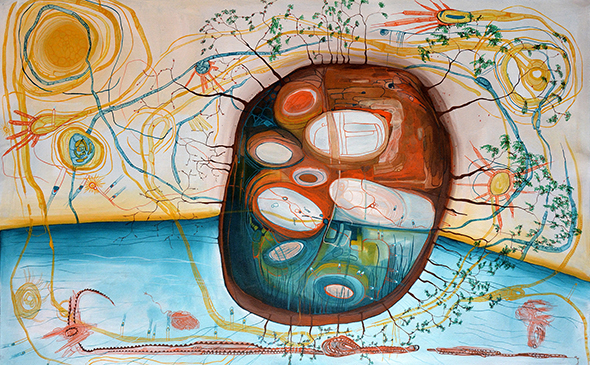 This artwork depicts the crocodile egg nest and provides an excellent overview of when to go hunting. Helen explains that hunting is all about the seasons, and there are signs in nature that inform when certain foods are ready to be collected.

“When the red kapok tree pods open, that means the croc eggs are ready.”

The central round figure in Helen’s art is the crocodile egg nest, which is found in the sand. To locate the nest, you need to prod the sand. “If the stick goes down, it’s there” explains Helen “but always keep an eye on the water. And always have more than two people with you when hunting for croc eggs.”

Wangi (The Start of the Wet) 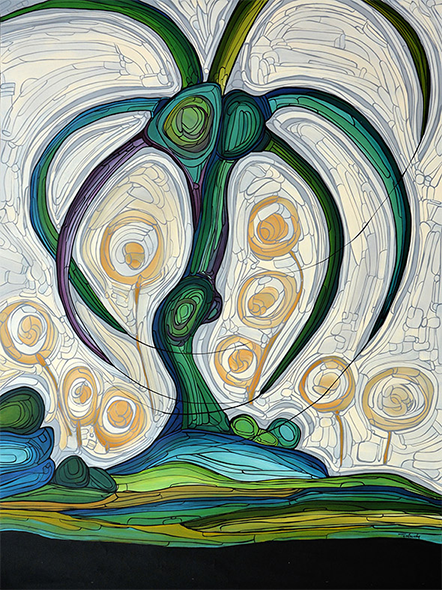 Wangi (The Start of the Wet)

Helen explains that in her country, there are only two seasons; the wet and the dry.

While green is Helen’s favourite colour, the ‘build up’ to the wet season – where the temperature and humidity reach drastic levels – is incredibly stifling and not really enjoyable. Once the rain starts, it doesn’t stop and it is common for flooding to occur.

Helen says that her favourite time of the year is the start of the Dry Season “everything is still green and there’s lots of hunting”.