Australian Aboriginal Flag | Kate Owen Gallery
Australia has two flags that represent the Indigenous people of Australia: the Aboriginal and the Torres Strait Islander flag. Both have become widely recognised symbols of the unity and identity of Australia’s First Nations People.

The Aboriginal flag was designed in 1971 by Luritja man Harold Thomas. Harold was a graduate of the South Australian School of Art. He was inspired to design one after attending a protest march in 1970. He was struck by the fact that Aboriginal people of Australia had no symbol of their own around which they could rally.

His original design used ochre colours, but he opted with red, black and yellow which would be more striking at protests. The design is divided horizontally into halves. The top half is black and the lower half red. There is a yellow circle in the centre.

The colours are symbolic. The yellow circle in the middle represents the sun, the giver of all life. The red represents the earth and the spiritual relationship of Aborignal people with the land. It can also represent the blood of Indigenous people shed during resistance warfare. The black represents Aboriginal people.

It was first flown in 1971 on National Aborigines Day in Victoria Square in Adelaide. When protesters erected the Aboriginal Tent Embassy in 1972 outside Parliament House in Canberra, they chose Thomas’s design as the symbol of their movement.

Since the Tent Embassy, Aboriginal people have continually harnessed the potency of this emblem as both a symbol of Aboriginal resistance and pride. Many Indigenous artists, designers, businesses, cooperatives and land councils have incorporated the design and its colours in logos to reflect their own distinctive identities while referencing a common Aboriginal identity.

The year 1988 marked 200 years since the arrival of the first fleet of British convict ships in Sydney. As many Bicentenary celebrations took place, it also triggered debates on the Australian identity and Aboriginal rights. This symbol of Aboriginality has provided a focus for activism and for new art from the 1980s and beyond.

One famous incident occurred in Portsmouth, England in 1987. Aboriginal artist Tracey Moffat opposed the flying of the Aboriginal flag on the First Fleet reenactment ships that were set to sail to Australia. Tracey Moffat was arrested after a confrontation with a historian who had arranged for it to be flown without Aboriginal permission.

In the same year sprinter Cathy Freeman made headlines after draping it around her shoulders during her victory lap at the Commonwealth games in Canada. At that time, it was not recognised as an official Australian flag.

Cathy also carried it, as well as the Australian flag after winning gold in the 400m at the 2000 Sydney Olympics.

This very same act was not met with the same amount of controversy. Rather, people saw it as a moment for the nation, symbolising the Australian people’s desire for reconciliation and pride in her Aboriginal cultural heritage. 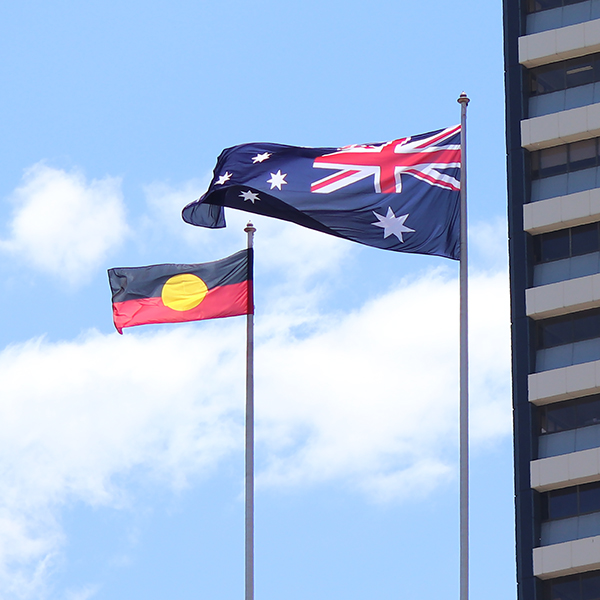 The history of copyright ownership of the Aboriginal flag is really a unique story. It highlights the power of art and artists to create works that can unify a people. It also reveals the complexities involved when an artwork reaches these atmospheric heights and ensuring there is a balance between public interest and the rights of the creator.

In view of its wide acceptance and importance in Australian society, the Commonwealth took steps in 1994 to give it legal recognition. After a period of public consultation, in July it was proclaimed a ‘Flag of Australia’ under the Flags Act 1953.

However, it wasn't until 1997 that the Federal Court of Australia officially recognised Harold Thomas as the author, after non-Indigenous producers had profited from sale of the emblem for over twenty-five years.

The decision in 1997 meant it was protected under the Copyright Act 1968 and could only be reproduced in accordance with this legislation or with the permission of Mr Thomas. Over the years that followed Mr Thomas leased reproduction rights to different companies.

Some companies aggressively enforced their exclusive rights. When media reports started highlighting incidences of not-for-profit Indigenous organizations being issued cease and desist letters for reproducing it on their clothing, it resulted in a movement known as ‘free the flag’.

This movement laid bare the passion for and sense of ownership that Australia’s First Nations People have for their flag. In recent years, there have been many discussions on how to balance the moral rights of the copyright holder and the desire of Aboriginal Australians to freely use their emblem.

In 2019 the Minister for Indigenous Australians, Ken Wyatt AM, met with Harold Thomas following various concerns around its reproduction and use. In a media statement, both expressed they were committed to the flag continuing to play a unifying role with people and communities right across Australia.

After a Senate Inquiry in 2020 and a lengthy consultation process, the Aboriginal flag copyright was transferred to the Commonwealth in January 2022. The Australian government paid $20.05 million to Mr Thomas and licence holders to extinguish the licences and secure copyright.

Mr Thomas will retain moral rights over the flag, which includes the right to be properly attributed and the protection of his work from derogatory treatment. There were also some other interesting conditions, which can be read on our blog piece here.

This means that Mr Thomas’ design can now be used on apparel such as sports jerseys and shirts, it can be painted on sports grounds, included on websites, in paintings and other artworks, used digitally and in any other medium without having to ask for permission or pay a fee.

The eye-catching green, blue and white flag of the Torres Strait was designed by fifteen-year-old Bernard Namok. Adopted in 1992, it was the winning entry in a design competition run by the Island Coordinating Council.

It has three horizontal panels, with green at the top and bottom and blue in between. These panels are divided by thin black lines. A white Dhari (traditional headdress) sits in the centre, with a five-pointed white star beneath it.

The Dhari symbolizes all Torres Strait Islander people. The five-pointed star symbolizes the five island groups of the Torres Strait. The star is also an important symbol for seafaring people, who use the constellations for navigation.

The green represents the land, the black stripes represent the people, and the blue the sea. The white of the Dhari and the star represent peace.

Copyright is owned by the Torres Strait Island Regional Council (TSIRC). The TSIRC gives permission for reproduction requests, subject to certain conditions which can be found on their website, along with their contact details. 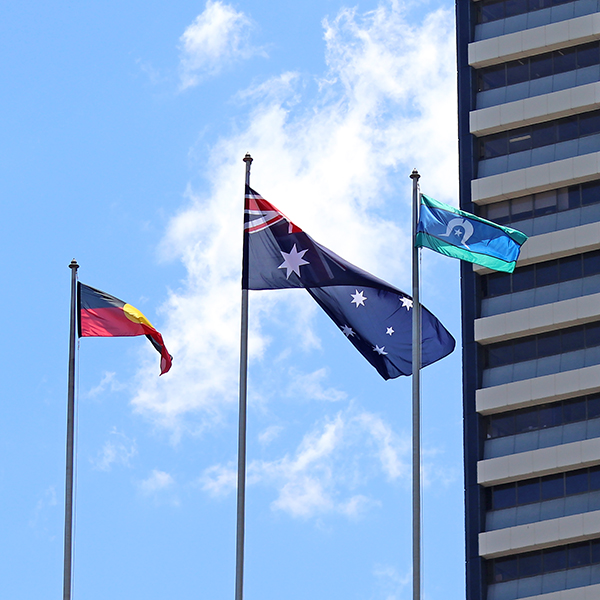 Permission is not required to fly the Indigenous flags of Australia. However, any questions on how and when to display the flags should be directed to the Commonwealth Flag Officer.