The Dreamtime or the Dreaming are the terms used to describe the Australian Aboriginal belief on the creation of the world. In the Dreamtime, Ancestor spirits formed the natural features of the earth and established the laws of science and society.

For Australian Indigenous people, the Dreaming is a holistic belief system that provides rules for living and a moral code. It also sets out rules for interacting with the natural environment. It is a total, integrated way of life.

The Dreaming continues to sustain generation after generation of Indigenous Australian peoples. Its powers are accessed through ceremony and through art.

Why is it called Dreamtime? | Aboriginal Spirituality | Dreaming Ancestors | More than a Myth | A Highly Philosophical and Sustainable Culture | It is the Past, Present and Future | Songlines | The Dreamtime in Aboriginal Art

Why is it called Dreamtime or Dreaming?

These are English words invented by anthropologists. Australia’s Indigenous people do not use these terms when speaking in their own tongues.

In the more than two hundred distinct Aboriginal languages of Australia, many different words exist for the concept of the Creation.

On our website, you may come across numerous artwork titles with the words Tjukurpa or Jukurrpa. These are the words used by artists belonging to the Pintupi and Warlpiri language groups. They are just a couple of examples of the diverse ways the concepts are expressed.

Terms for Dreamtime are also used in a variety of contexts that westerners sometimes find confusing. For example, when discussing a painting, an Aboriginal person might say “that’s my Tjukurrpa”. On the other hand, when someone is absent for ceremony, their relatives may say “he’s gone for Tjukurrpa”.

One of the basic qualities of Indigenous spirituality or belief system is that everything is interconnected. All animals, birds, insects, reptiles, plants and other life forms, including man, are part of nature. It is only the outward forms that are different.

The characters of The Creation narratives are known as Ancestral Beings. They are born and may sometimes die. Regardless, they are eternally present.

Their spirits are passed on to their descendants such as the Goanna, Kangaroo, Honey Ant, Snake, Yam. These descendants have become totems within the diverse groups across the continent.

All parts of the landscape are significant. It is through the landscape itself that the spiritual and political identities of groups and individuals are formed. 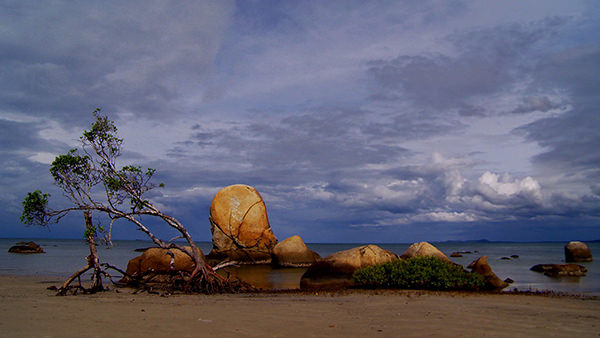 Aboriginal spirituality can be expressed visually, musically and ceremonially.

The Dreaming Ancestors, which are also known as Ancestral Spirits or Ancestral Beings, are the ancient Creational figures. They were the first to move through country, creating landforms, singing and performing ceremonies. These Ancestral Beings did not only take human form. They could be an animal, reptile, an insect, rocks or trees or another type of flora.

The Ancestors left their life force, their power, in the landscape and in cultural objects. When First Nations people today paint their body for ceremony, they use the designs that were also painted on the Ancestral Spirits at the time of the first ceremony.

The actions and behaviours of the Ancestors provide models for human and non-human activity, social behaviour, ethics and morality. The stories may identify both appropriate and inappropriate human behaviours and thus can sometimes be compared to biblical parables.

You will notice that the Ancestors frequently behave badly, acting as what could be described as “negative exemplars”. They are not always happy narratives, but there is always something to be learned from them. 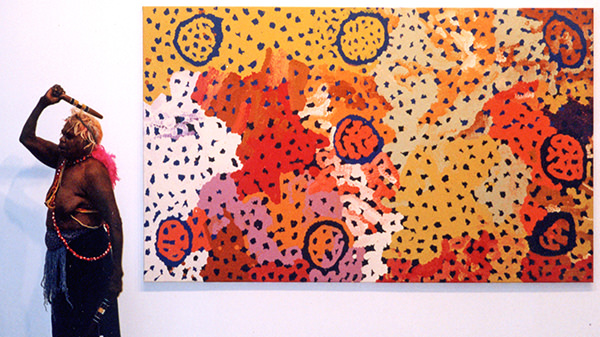 More than just a myth and not a religion

Sometimes people translate the Dreaming as mythology. This does not do it justice. It implies that they are not true.

Many Aboriginal people view such an attitude as an insult. They are not Aboriginal mythologies.

The Dreaming is treated very seriously by Aboriginal people. They are revered accounts. Many times, at the conclusion of a story, the storyteller will say “This is a true story. Really important one, that one.”

It is not a monotheistic or a polytheistic Aboriginal religion. Comparing the term ‘The Dreaming’ to ‘religion’ in the Western sense diminishes its complexity. It also fails to capture the fact that the Dreaming permeates every aspect of Aboriginal cultures and societies.

There is no ‘heaven’ or ‘hell’ – it is all based here on country. There is no afterlife to redeem your sins. Law and payback must be dealt with here and now. When you pass away, you will return to country.

A highly philosophical and sustainable culture

In Indigenous Australian culture, there is also no separation between the sacred and non-sacred. All actions are steeped in spiritual purpose. The mere act of burning grass has a specific story attached to it, a story that directs the need and benefits of the action. It is an action laid down by the Ancestors and is enshrined in Law. 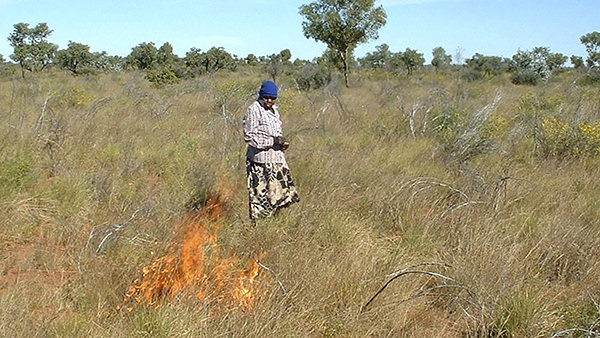 Indigenous culture does not seek to continually change or ‘improve’ the world around it. Much of the emphasis of Aboriginal culture is to keep the world the same.

It may be argued that Indigenous Australians had a sustainable way of life that would have ensured their existence for millennia. The primary mechanism Indigenous Australian people used for achieving this sustainable balance was the accounts from the Dreamtime. Compare that to Western culture which is battling the effects of human impact on the land after only 2,000 years. 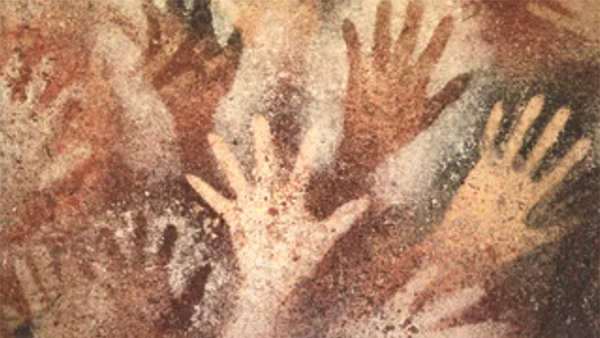 It is the past, the present and the future

The Aboriginal Dreamtime is difficult for people of western culture to understand because western norms such as the idea of time are not followed. It is not static or linear. It is the past, but it is also the present and the future.

It is constantly evolving to explain events and changes today, such as floods, storms and occurrences in people's lives, both negative and positive. The stories are a Creative force from a distant past. However, they are also a constant and pervasive force in present day life, a lived daily reality.

Another way of looking at it is that the Dreaming stories are foundational, but the work of sustaining the world is ongoing. Law was established by Ancestors. The work that people do to sustain the connections can never end.

Songlines – the paths followed by the Ancestors

Australian First Nations people have no written language of their own, so all important information was transmitted verbally. Ceremonial Songs held great knowledge. Songlines connected language groups and clans from the Torres Strait through the desert country and onwards. 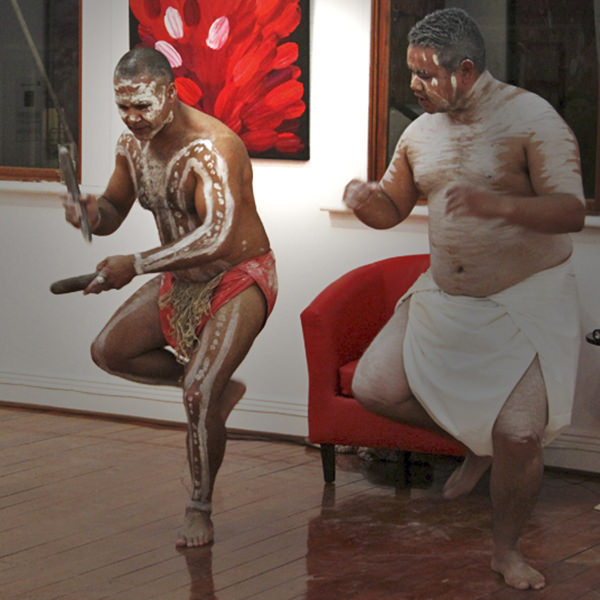 In the Seven Sisters Creation Story, the central characters travel great distances across Australia. From Wangkathaa and Martu Country in the west, through to Warlpiri and Anmatyerre Country in the north, and down to the remote tri-state environment of the NPY Lands.

The characters cross-country travels take them through many different clans. Each clan knows in detail what happened to the Ancestral Beings while on their Country, almost like a ‘chapter’ out of this great tale. During a big ceremony, when clans would come together, the entire story would be sung.

Songlines can also be referred to as ‘Dreaming tracks’. They trace the journeys of ancestral spirits as they created the land, animals and lore. 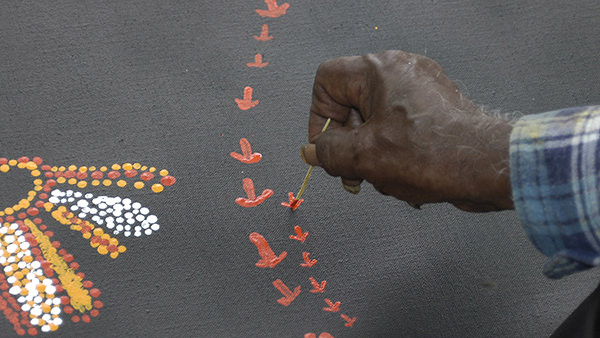 Features and directions of travel are included in the songs, as well as intricate explanations of land formations, plant remedies and animal behaviour. All this knowledge is memorised and sung so the traveller knows the route to their destination and how to survive.

The Dreamtime in Aboriginal Art

Before European contact, Indigenous Australian art was closely connected with religious ceremony and practice. The designs, patterns and stories were taught to the Aboriginal people by the Ancestors. They were then replicated through dance, song, body paint for ceremonies, rock art and on cultural objects.

As mentioned previously, many stories relate to landforms which mean many tales are location specific. When going through Law, the elders take the young people onto country to show them the landforms and explain the stories. Since European contact, Indigenous Australians have been affected by government policies that have removed them from their country.

This was particularly true for the Pintupi people, who were transported or migrated to the community of Papunya in the Northern Territory. The elders faced huge uncertainty, not knowing how they could pass on Law and culture without physical reference to landforms and the stories that go with them. They were fearful that culture would be lost.

In the early 1970s, the Pintupi people at Papunya first had the opportunity to paint using western materials such as acrylic paint and canvas. It is not surprising that many depicted their Dreamtime stories. It was a way to assert their identity and ensure their stories were taught to the younger generation.

During the 1970s and 1980s, small groups of Aboriginal people started leaving the larger mission or government run communities, such as Papunya. They moved back to their traditional and often remote lands.

As the old saying goes, ‘there’s no place like home’ and many Aboriginal artists experienced a creative explosion once returning to their country. This further established Australia’s Aboriginal art movement.

To this day, the central inspiration for many Aboriginal artists is the Dreaming. Designs from rock art and ceremonial life continues as the reference point and structure behind much contemporary art. Indigenous Australian art continues to express Indigenous beliefs and cosmology, and people’s hope and aspirations in a changing world. 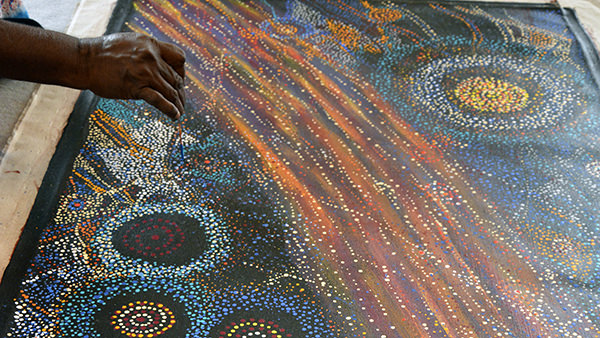