There’s a lot more to Aboriginal art than just dot painting. On this page, we will discuss one painting style known as cross hatching art or ‘rarrk’.

Artists believe that these patterns of colour and crossing lines contain the power associated with that particular painting or story subject, and this is easy to imagine given the awesome images this technique creates.

Cross Hatching is a style that has been used in art making for many years by most civilisations. Its most common application in art making is in drawing.

In drawing, an artist may use contour lines to define the outline or silhouette of an object. Then hatching lines may be used to 'fill' or shade a part of the artwork.

They may be straight fine lines, or follow the shape (contour) of the object. The latter is also sometimes referred to as cross contour lines.

This method of line drawing suggests shadows. The closer together the lines, the darker value you will create. The marks are made to further create the illusion of form. They are also used to suggest the object is casting a shadow.

An unsuccessful example of this technique will not communicate the cross contours (three-dimensionality) of an object, resulting in a drawing that looks flat.

Hatching is generally made by closely spaced parallel lines executed in drawing materials such as pen and ink, pencil, charcoal, crayon, paint and the like.

Cross Hatching is what it sounds like; another set of lines crossing the first one.

How it is used in Australian Aboriginal Art

In Indigenous Australian Art, the fine technique of cross hatching has taken on a more structured and stylised appearance and can have significant meaning when it is used in an artwork.

It is used largely by Aboriginal artists of the Northern Territory, particularly in Arnhem Land, where the technique is known as ‘Rarrk’.

Aboriginal people also use this technique in the famous X-ray style paintings, where the internal organs of animals are depicted. 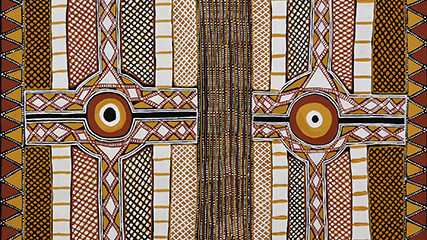 The process of painting miny’tji is made from the crosshatched layering of lines into geometric units. Different shapes and configurations of these layers give identity and ownership to specific Yolngu groups. 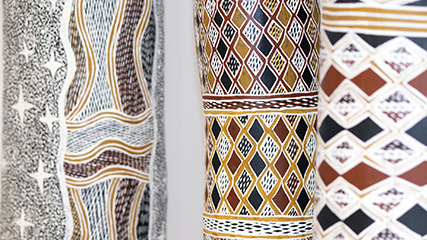 Each clan has its own unique miny’tji signature, and a master of rarrk paintings can make their clan designs shimmer with brilliance and beauty. 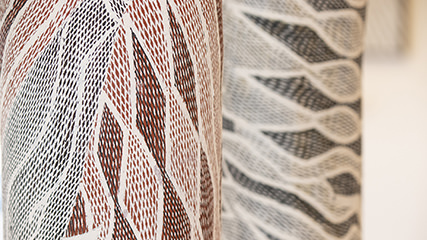 It is also a painting method that is imbued with sacred knowledge. The materials used are all collected on Country and have particular significance to the artist.

The fine hatching technique of the clan designs is achieved with the marwat, a brush made of human hair. A few strands of human hair (about three to four centimeters long) is bound together with cotton thread on a carved wooden handle.

The marwat is drawn through a slurry of ochre paint and placed strategically on the surface and pushed in a direction away from the artist. The hairs, already straight with the weight of the paint, take the least line of resistance and straighten out perfectly, producing a fine, straight line.

The process is repeated at regular intervals and then when this is dry, the same is done in the other direction. Artists use the prescribed palette of the area or the subject and are traditionally painted using alternate fields of red, yellow, black and white pigments.

Artists continue to use this traditional handmade brush, as they believe it is the marwat that delivers brilliance, energy and power to ancestral designs.

Back to Painting Styles