One of the Great Aboriginal Creation Stories

The Rainbow Serpent is considered one of the most powerful and widespread Ancestral Beings of Aboriginal Australia. Rock art featuring this great Ancestral being dates as far back as 6,000 years, making it one of the oldest continuous religious beliefs in the world.

The specific Dreamtime story depends on the climate and culture of the Indigenous group telling it, but there are some common threads present.The story describes a time long ago when the Earth was flat. The serpent was one of the Dreamtime creatures who held great powers and gave shape to the Earth. The serpent emerged from under the ground to awaken different groups of animals.

The movement of its body formed physical features like hills, gorges, creeks and rivers into the once-featureless terrain.

It slithered all over the country, occupying waterholes and providing nourishing water. Once it grew tired with shaping the Earth, it coiled into a waterhole where it lays to this day.

Aboriginal people are very careful not to disturb water sites that it inhabits. They show great respect to it as its powers are immense.  The Ancestral Being can also at times be unpredictable, causing great destruction in the form of drought, cyclones and floods.

During heavy rainstorms the serpent’s waterhole can be disturbed. After the rain, when the sun has touched its coloured body, it can rise up from beneath the ground and travel through the clouds. Flying across the sky to another waterhole.

Rainbows are believed to be the serpent snaking from one watering hole to the next, replenishing waterholes around the country. This is the explanation given as to why some sources of water never dry up even during times of great drought.

It represents the life-giving value of water as well as the cycle of the seasons. Great creation stories of the serpent vary across the country. Tribes of the monsoonal areas describe an epic interaction between the Sun, Serpent and Wind in their Dreaming stories. Whereas tribes of the central desert experience less drastic seasonal shifts and their stories reflect this.

Examples of the Story from Across Australia

There are dozens of different names given to the Rainbow Serpent by the many distinct Aboriginal languages spoken across the country. Below is a brief overview of some of the stories represented by the artists at our gallery:

In the Kimberley region of Australia, the great creator spirit is the Wandjina. It is believed that the Wandjina gave people culture, law and songs.

The Ungud snake was the chosen animal to assist with the formation of the earth, creating rivers, gorges, and streams. Aboriginal artists from the Kimberley region usually depict the Wandjina and Ungud Snakes together in their paintings.

Interestingly, the Kimberley pearl shell is often deemed to be powerful. It is valued because of the cultural association of its brilliant lustre with Ungud. Artists located in the north west Kimberley maintain a unique practice of engraving pearl shells with geometric designs.

Antwerrkenh, the ‘Flying Snakes’ of the Western Desert

The great artist Clifford Possum was from Anmatyerre country in Australia’s western desert, located about 200 kilometres north-west of Alice Springs. In many of his artworks, Clifford Possum features the soakage site called Aljupa, which was created by two ancestral rainbow snakes a long time ago. 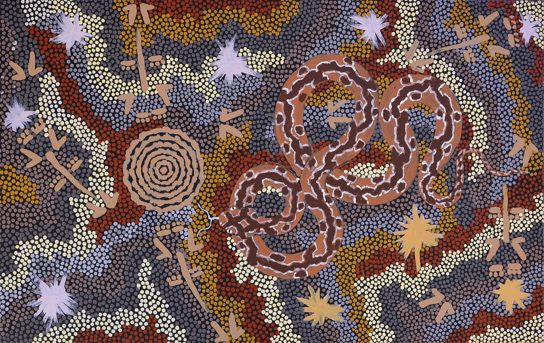 East of Mt Wedge is a long line of claypans which fill in heavy rains and connect up over a distance of almost 20kms. Several mythological snakes are associated with this country, including the Carpet Snake shown in this painting.

The journey of the Flying Snakes began at Lajamanu, about 800kms from Aljupa on the northern rim of the Tanami Desert. From Lajamanu, the snakes “come up all the way along, from every country, just like wandering river” forming the rivers and creek beds as they went by blowing air out through their nostrils.

Their journey not only carved out landforms, but also created freshwater soakages like Aljupa, upon which survival depended in this desert country. After Aljupa, there is a 50km stretch of mulga and witchetty grub country devoid of watercourses and soakages. This is because at Aljupa the snakes took flight and flew south (hence the name ‘flying snakes’).

Knowledge of the locations of these soakages and dozens of other smaller sources of water the snakes made are stored in the songs and stories of the Flying Snake Dreaming. This knowledge enabled the Anmatyerre people to move about freely from Aljupa over a huge expanse of country in which they also had custodial rights and associations.

Wanampi, of the APY Lands

Wanampi is the Pitjantjatjara word meaning water serpent, water snake monster, or rainbow serpent. The Wanampi are very dangerous creatures, often unfriendly and sometimes reaching hundreds of meters long. They are believed to live in and guard waterholes.

It is said that Wanampi will take the form of a rainbow when offended.  In its rainbow state, the Wanampi is revered by the Pitjantjatjara people but the Wanampi can kill intruders, taking their spirit.

The Pitjantjatjara people still call out to the serpent and light a fire before visiting the Piltati rock hole in the Mann Ranges. They will tell the Wanampi that they are friends and that they are approaching and ask access permission from the Wanampi.

There are signs that the Pitjantjatjara people look for, and if the signs are right, they may proceed. If the signs are not, then they go away. Fires and smoke are used for communication to other families and to the Spiritual Beings as well.

At Uluru (Ayers Rock) it is important to call out to the Wanampi before approaching. It is also forbidden to drink at the waterhole where the Wanampi lives. 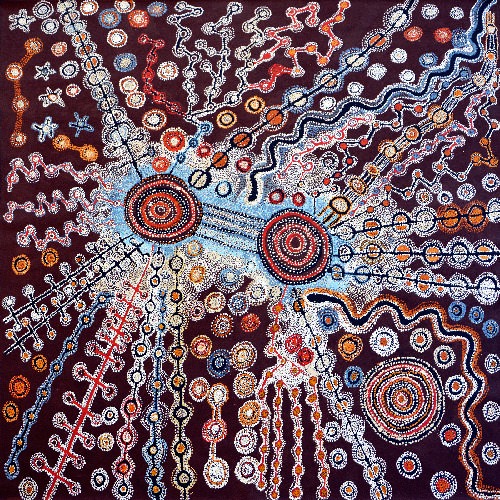 Arnhem Land is a remote part of Australia located in the north eastern corner of the Northern Territory.  In this part of Australia, the spirit has a number of manifestations. One of them is Ngalyod, who lives beneath the water at specific waterholes in western Arnhem Land. Great respect for Aboriginal Law is shown at these sites for fear that Ngalyod might be angered and cause sickness and cyclones.

Depictions of Ngalyod usually show the leaves of the waterlily, which is closely associated with this figure. The serpent can change into other animal forms or become a blend of several, such as snake, fish, crocodile, buffalo and kangaroo.

Ngalyod’s transformational character becomes a metaphor for the actual transformation of the environment in Arnhem Land. When the wet season arrives, once dry waterholes transform into swamps abounding with fish and bird life.

In western Arnhem Land, there are also deposits of a pure white ochre which is highly prized and used for ceremonies. The ochre is mined and traded from sacred sites and is said to be the faeces of the serpent.

The Dreamtime story of Goorialla is well known thanks to the classic children’s picture book by Dick Roughsey and Percy Trezise. It is an adaptation of a Dreamtime story from the Northern Territory that tells of an all-powerful rainbow serpent that travelled across the flat land in search of his own people.

As he travelled from the south to the north of the country, he made formations in the land. Finally, after traversing around the country, he heard his people singing and he found them. He was greeted warmly and watched them sing and dance.

He proclaimed that they were dancing wrong and showed them the correct way to dance and dress for ceremony. After the dancing, a big storm brewed in the sky. Everyone made humpies to ride out the storm.

Two brothers, known as the rainbow lorikeet brothers, or ‘Bil Bil’ did not have a humpy. They asked everyone if they could share their shelter. He tricked the brothers and told them they could stay in his humpy. Instead, he swallowed them whole.

Scared that the people would notice the brothers missing, he slithered away with the brothers in his belly. When the clan woke, they followed the tracks left by him until they reached the base of a huge mountain.

The Goanna brothers were able to scale the mountain and found him asleep. They carefully cut open his stomach to let the Bil Bil brothers out. They had turned into rainbow lorikeet birds and were able to fly away to safety.

The Goanna brothers returned to their people safely, but when Gorialla woke to find his empty belly he was angered. He lashed his red tongue like lightning and made the mountain shake. He threw parts of the mountain all over the country which formed all the hills and mountains of today. Some of the people tried to hide from him by turning into birds, animals and insects that live in the country today.

When his anger was spent there was only a small hill remaining. He slithered down and disappeared into the sea, where he lives to this day.

Now the remaining people have to take care of all the animals and all the living things who, back in the Dreamtime, were the people who hid from him. It is believed that the shooting star racing across the nights sky is Goorialla, watching over everybody.

The Rainbow Serpent in Aboriginal Art

This dreaming story pervades not only oral history but also ceremony, performance and visual art. It's represented in many different forms by artists in different Aboriginal communities. 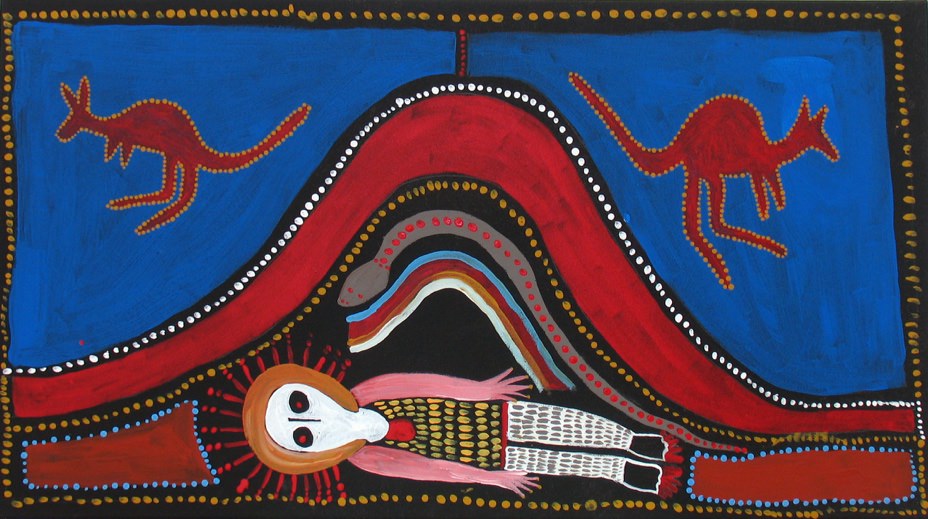 Aboriginal artists from desert communities may depict a snake with rainbow tones on its back, living underneath the waterholes. In Arnhem Land its supernatural nature is usually emphasised by its form, often by incorporating the attributes from a variety of creatures.

For example, a bark painting of Ngalyod may depict it with the head of a crocodile and wearing a feather tassel on its head as people do in ceremony. The combination of different features is an artistic technique to showcase Ngalyod’s attributes: the strength of a crocodile, the fertility of a serpent and his place in the ancestral realm as expressed in ceremony.

Dynamic fluid lines may show the Creator Being in motion and suggest his transformative powers as he forms features of the landscape. The Rainbow Serpent may be depicted in a coiled position, suggesting the moment of creation as it creates a waterhole that later becomes a sacred place.

In Arnhem Land, a crosshatching technique known as rarrk is used to emulate the glistening surface of the snake’s skin. Exceptional rarrk paintings also have a ‘shimmering’ effect, which suggests the presence of ancestral power within the painting.

Back to Dreamtime Stories