The Yuendumu community is one of the largest Aboriginal remote communities in central Australia, with the vast majority speaking Warlpiri as their first language.  It is located roughly 300kms north west of Alice Springs along the Tanami Road in the Northern Territory.

Many famous artists come from this region of Australia. Some artists such as Judy Napangardi Watson use bright bold contrasting colours while still retaining important iconographic elements. Others such as Dorothy Napangardi have arrived at a more abstracted and minimal method of Aboriginal art. The diversity of styles from this region makes their art truly captivating.

Description of the Region

The landscape around the community of Yuendumu is covered with spinifex grassland, acacia shrubland, mulga and bloodwood eucalypts on deep red desert earth. 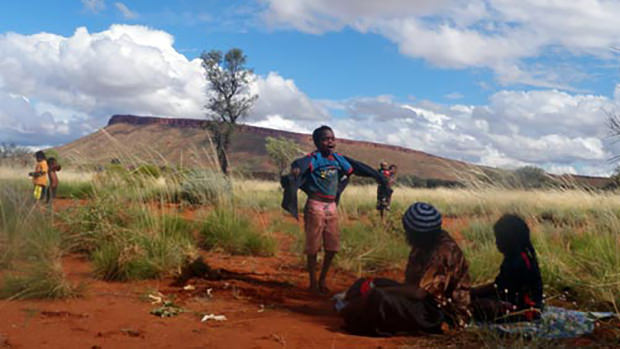 There is a large salt lake called Ngayurru (Lake Mackay) which is dry most of the time. But when it is filled with water, animals and waterbirds congregate around the lake.

While it may just appear like an arid and isolated area, local people see a landscape abundant in natural resources.

There is also a kaleidoscope of colours and intricate patterns within the natural environment that artists can draw inspiration from – the fluorescent green and yellow of the budgerigar flocks or the shimmering cracked surface of the salt lake.

Art From the Region

From the outset, art from Yuendumu has been celebrated for its bright use of colours and intricate patterns. Unlike the formal work of Papunya Tula artists, who decided to restrict their palette to ochre-like colours, Yuendumu painters have always used bright acrylics in a variety of hues.

The art can be raw and explosive, or perhaps more precise in quality but losing nothing of its vibrant coloration. 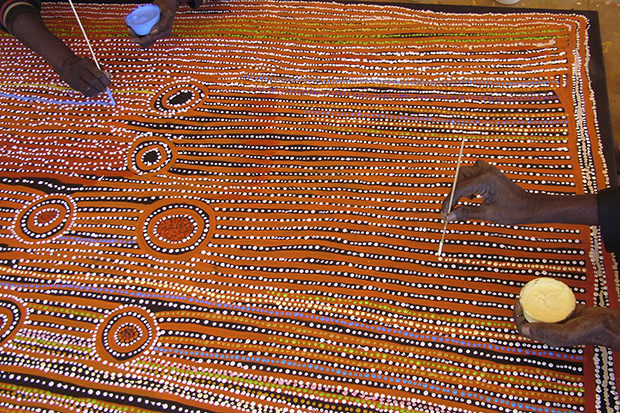 Then a trailblazing artist emerged from this community, who worked towards a previously unseen abstracted method of Aboriginal art – removing all iconography in her work. Dorothy Napangardi (deceased) is recognised internationally as one of Australia's foremost artists. Her highly innovative style provided significant artistic leadership for artists within the contemporary Aboriginal art movement. 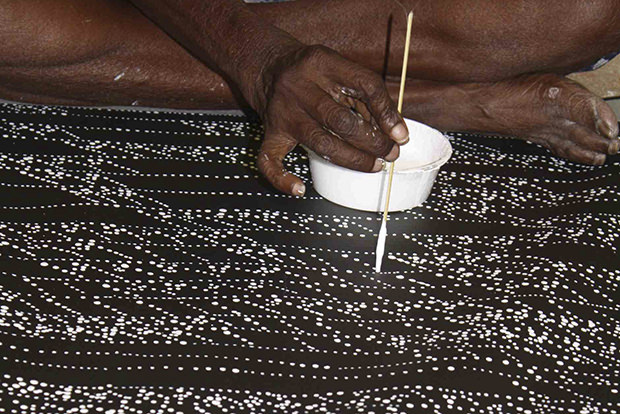 Artists from this region have also caught the attention of art lovers around the world for their luminous paintings of the night sky and their charming portrayals of the birds and animals that live around Yuendumu.

The Walpiri people are the traditional owners of the area. In the late 19th and early 20th centuries there was competition for the land between the Warlpiri and non-Indigenous people wanting to establish cattle stations in the area.

Scarcity of resources like food and water had led to tensions between settlers and Aboriginal people across the Central Australian region. Conflict and reprisals escalated and in 1928 the Coniston Massacre occurred, leaving a traumatic mark on the lives of many and resulted in the dispersal of people from their traditional country.

Yuendumu was established by the Native Affairs Branch in 1946 to provide rations and welfare. A Baptist Mission was established in 1947 and by 1955 many local Warlpiri groups, mostly from the Granites and Bullocky Bore, were settled in Yuendumu.

In 1989, international interest in both the Yuendumu community and Australian Aboriginal Art exploded when six Yuendumu artists were invited to exhibit a large ground painting as part of the exhibition ‘Megiciens de la Terre’ at the Pompidou Centre in Paris.

Major commissions followed, cementing the community’s position as one of the great artistic regions.

People enjoy their sport and local barbeques. There are three sports ovals, four basketball courts and a youth centre. There are five local football teams participating in the regional competition in Alice Springs. In the off-season, teams compete against each other.

There is also a health centre, primary and secondary school and an aged care facility which ensures elders can stay with family on Country and important cultural knowledge is maintained and transferred to the next generation.

There are also independent organisations including the Warlpiri Media Centre, the Warukulangu Arts Centre and Mt Theo Youth Centre which are not only important sources of local employment, but hubs of social activity.