Warlukurlangu Artists Aboriginal Corporation is one of the longest running and most successful Aboriginal-owned art centres. It is located in Yuendumu, 300kms northwest of Alice Springs in the Northern Territory, Australia.

It is Aboriginal owned and governed by its artists from the remote desert communities of Yuendumu and Nyirripi in Central Australia. It allows for traditional Warlpiri culture to be expressed and is an essential part of Yuendumu's community life. The sale of their artworks benefits both artists and their community.

The art centre is famous for its gloriously colourful acrylic paintings and fine limited edition prints. The art centre has a national and international profile and many of its members' works are highly collectable. Artworks have been featured in hundreds of exhibitions around the globe and have been reproduced in many publications in Australia.

The History of Yuendumu’s Art Centre 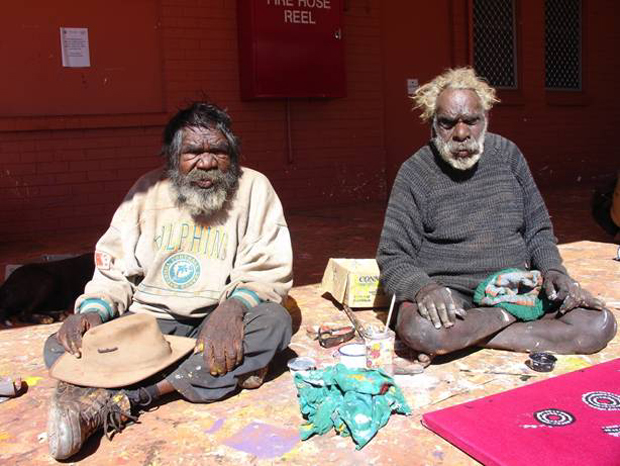 The art centre in the nearby community of Papunya had a well-established brand based on traditional ochres in red, yellow, black and white. From its inception, Warlukurlangu’s art was unique for the artists bold use of colour.

Another distinctive feature was the use of very traditional iconography. The artists painted their Dreaming stories (Jukurrpa), ensuring appropriate Warlpiri relationships of kirda (owners) and kurdugurlu (guardians) were followed.

The symbolic elements of a painting that held the story (known as ‘kurawarri’) were painted first. It was then scrutinized by others for their adherence to Jukurrpa. The dotting that filled the canvases was less important. Many artists developed varying styles of application and experimented with different colours. 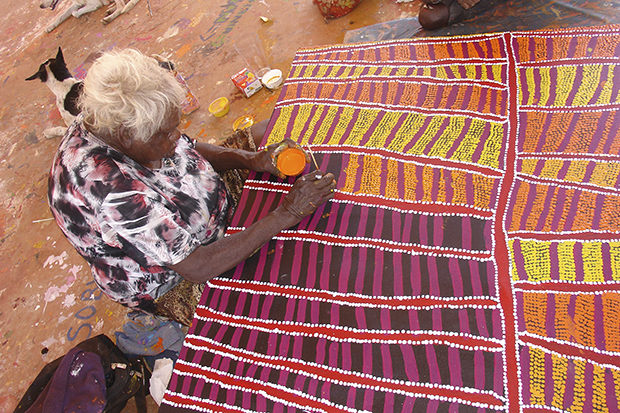 Nowadays, the artists paint a diverse range of subject matter. Sometimes artists tell the story of their connection to their country. Other artists depict the features of the landscape and the plants and animals that are found there. While others depict the creation story that occurred in the Dreamtime.

The artists had already become famous for their bright use of colours. In the early 2000s the artists pushed this even further. Now they showcase the kaleidoscope of colours that are on display in the landscape, such as the orange of the natural honey, the fluorescent green of the budgerigar, and the display of colourful flowers after rain.

In recent years artists have also enthusiastically extended their technical range and style.

The primary cultural organisation in Yuendumu

The art centre, says manager Cecilia Alfonso, is one of the pivotal social and cultural hubs in the community. ‘We’re committed to providing a safe and happy environment, not only for painting, but for community members to gather and socialise,’ she says. ‘The staff organise regular barbeques, bush trips and film nights and the centre works hard to build strong relationships with the other community organisations.’

The Art Centre also sponsors events during the famous annual Yuendumu Sports weekend. They offer financial support for ‘sorry camps’ and provide feathers, ochres and other items for ceremony. The art centre now provides services to other neighbouring remote communities including Nyirripi and Yuelumu.

Warlukurlangu means "belonging to fire" in the local Warlpiri language and is named after a Fire Dreaming site west of Yuendumu.