Kangaroo Aboriginal art has been created for thousands of years. They are depicted in ancient rock art sites, and contemporary Aboriginal artists use an array of modern mediums and styles to depict this revered animal.

One of the most iconic Australian Animals

Found only in Australia, the Kangaroo is well-known for its powerful back legs and large muscular tail. They are part of the Macropodidae family, which also includes wallabies and quokkas.

Their unique physical features make them easy to make out in ancient rock art sites. They are outlined in ochre and natural earth pigments, and sometimes their internal organs are shown in a technique known as the ‘x-ray style’.

Around the Sydney region, you will also find them portrayed in rock engravings sites.

Something else that makes this marsupial easy to recognize is that it is the only large animal to hop from place to place. Their animal tracks are clearly identifiable thanks to their large hind legs which leave a distinct mark on the ground.

They are sometimes represented by their track marks in Aboriginal art. They look like a set of mirror-image tick shapes. They feature in this artwork by Nyrulla Possum:

An important role in the lives of Indigenous Australians

Pre-contact, Aboriginal people invested in making the land appealing to the kangaroo, which provided meat and clothing. Fur, bone, and gristle were also used for ornaments, weapons, and ceremonial and everyday objects.

In many Aboriginal cultures, the animal is a Creator spirit in their Dreamtime stories. They also hold a totemic status and are featured in ceremonies.

This animal often features in Aboriginal art, either as part of the natural landscape, as prized food from a hunting trip, or as the Dreaming ancestor. 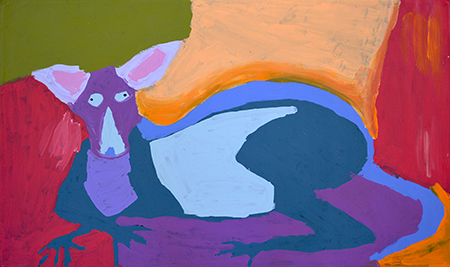